Fire on the Mountain

On July 2, 1994, a rainless thunderstorm bull-rushed its way from Grand Junction eastward along the Colorado River. When lightning struck Storm King Mountain that evening, just west of Glenwood Springs, nearby residents reported a small, smoldering fire. No one took it seriously.

After a record year of drought, searing heat, and a near total lack of humidity, conditions were ripe for a devastating fire season. The dangers were high, and officials from the National Oceanic and Atmospheric Administration (NOAA) issued several red flag warnings out of Grand Junction during that timeframe. The fire on Storm King burned for days, seemingly harmless, and was largely ignored by BLM officials. Two days after it began, the fire had grown to a still manageable size of roughly 3 acres.

It wouldn’t be until July 5 that any substantial effort was made to fight the fire, and on July 6 hotshots from Prineville, Oregon, joined forces with several Missoula, Montana, smoke jumpers to construct what became known as the West Flank Fireline. The fireline was constructed downhill, and despite the reservations of several experienced firefighters, the small spot fires in the bottom of the West Drainage were ignored. 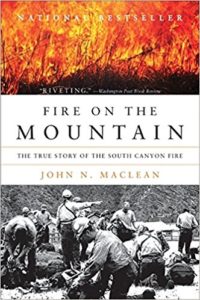 Then, the unthinkable. As John Maclean masterfully details in his book, Fire on the Mountain, firefighters were trapped in the West Drainage when the fire blew up, a result of an incoming front that brought afternoon winds of 40-50 mph with humidity dropping below 10 percent. All those innocent little spot fires suddenly engulfed the draw, leaving no way of escape for the 12 firefighters in its midst. As the flames roared up the mountain like a freight train, 14 men and women were trapped in the inferno and did not survive.

In many ways, the devastating toll of the fire was avoidable and reflected a systemic failure of leadership. A 1995 OSHA report “flatly blamed fire supervisors, on and off Storm King Mountain, for the disaster” (Fire on the Mountain, 243). Supervisors out of Grand Junction, Pete Blume and Winslow Robertson, failed to respond to the fire, provide adequate resources for extinguishing it, or communicate vital weather forecasts to the men on the mountain battling the blaze. Tankers were left sitting at Walker field in Grand Junction on the runway, loaded with fire retardant but never dispatched. Aerial observation of the fire was neglected, and as a result no one on the mountain had the complete picture of what the fire was doing.

HARD MEN: INTO THE FIRE

So often in the church, our leadership is no better than what was displayed during that July summer in the early 90s. As pastors and elders, we ignore sin in our churches, refusing to put out the small spot fires in people’s lives, refusing to get involved. We claim it’s not our job, leave the drama to the paid professionals, therapists, and Freudian psychologists, thank you very much.

We ignore warning signs, downplay the damage to ensue, and justify our inaction. Like the local authorities in Colorado, we fight over whose responsibility it is to put out the flames in our congregants’ lives, the kind that smolder for months and years and, we hope, don’t torch the place.

And like the endless BLM reports demonstrate, we keep claiming the terrain is too steep, the fires too inaccessible. If I get involved in that nuclear marriage, I’ll have claw marks running down both sides of my face from the unwanted intervention. Especially in rural places, our involvement in the suppression of sin can often cause oceanic rifts in familial relations. There are immediate, uncomfortable prices to pay. So we do nothing.

We sit in our offices and play keyboard commando with other pastors and denominational officials over trivial doctrinal and procedural matters, while our people’s lives are quite literally burning to the ground. We let other men do the fighting, then criticize from the comfort of our armchairs, our feathers proudly puffed and preened with every stroke of the keyboard.

It is then that the small, 3-acre fires meet with spiritual drought and the winds of suffering and then, suddenly, become a screaming sea of fire. A blowup. And we, with our high-brow seminary degrees, hide behind our diplomas and titles, while our lay people do their best to put out the unrelenting inferno. So often, they get trapped in West Drainages of their own, consumed by the roaring-freight-train-oven of unchecked sin, with no way of escape. When the dust has settled, the trained men quip, I told you not to go down there.

As the BLM and Forest Service did, we can blame the Don Mackeys of the world, the smoke jumpers and first responders who did the best they could, engaged the fire, and ultimately paid for their mistakes and miscalculations with their own lives. It’s all too easy and convenient to blame the dead, those who can offer no rebuttal.

Or, as leaders, we can take ownership for our failure to be hard, stand tall in taking the initiative, scope out the fires, and clearly communicate a strategy for containment and suppression. When our plans fail, we own them. We can confess and repent of the ways we’ve allowed the spot fires of discontent, bitterness, or greed to burn unchecked in our own hearts and in our people’s lives. And we can start running into the flames, like men.

It’s too easy to stand on the sidelines doing nothing and then write reports critiquing the ones who did all the fighting and bleeding and burning. That’s what soft men and cowards do.

It is not the critic who counts; not the man who points out how the strong man stumbles, or where the doer of deeds could have done them better. The credit belongs to the man who is actually in the arena, whose face is marred by dust and sweat and blood; who strives valiantly; who errs, who comes short again and again, because there is no effort without error and shortcoming; but who does actually strive to do the deeds; who knows great enthusiasms, the great devotions; who spends himself in a worthy cause; who at the best knows in the end the triumph of high achievement, and who at the worst, if he fails, at least fails while daring greatly, so that his place shall never be with those cold and timid souls who neither know victory nor defeat. — Teddy Roosevelt

Hard men run into burning buildings, into the fires on the mountain, while everyone else is running out. We don’t wait for the blow up. We see a spot fire and, as wildland fire policy teaches, we engage and suppress immediately. As Jude said, hard men of God are to run into the blaze of sin, “pulling out of the fire” (1:23).

Don Mackey was a hard man. He knew, after it was too late, that his decisions put the Prineville hotshots in grave danger. They were trapped in the West Drainage. Like the other fire supervisors, he could have crested Hell’s Gate Ridge and made his escape to safety. But he went back; he took responsibility. And there, at the back of the line, trying to urge the other 11 firefighters over the hill, he was consumed by the flames. Those are the heroic actions of a courageous, hard man.

The soft men sat at their desks and blamed men like Don. The two main fire supervisors never left Grand Junction, at least not until the Governor showed up with media crews. When all was said and done, they both got raises and the safety net of a pension to break their fall.

The hard men like Don? They got a stone cross on the side of a mountain.

Let us take up our crosses and fight the fires that rage in our people’s lives. We’ll make mistakes. We’ll get burned. And if we’re lucky, we’ll get a cross on the side of the mountain, having died for the flock that Christ redeemed. If we could only be so lucky.

Once more unto the breach, dear friends, once more;
Or close the wall up with our English dead.
In peace there’s nothing so becomes a man
As modest stillness and humility:
But when the blast of war blows in our ears,
Then imitate the action of the tiger;
Stiffen the sinews, summon up the blood,
Disguise fair nature with hard-favour’d rage;
Then lend the eye a terrible aspect;
Let pry through the portage of the head
Like the brass cannon; let the brow o’erwhelm it
As fearfully as doth a galled rock
O’erhang and jutty his confounded base,
Swill’d with the wild and wasteful ocean. — Shakespeare, Henry V

Why Soft Men Will Get You Killed

Fighting for What is Behind Us

This site uses "cookies" to provide you the best experience on the website. If you continue to use this site we'll assume you're legally happy with that cause you're a normal person who enjoys cookies.ACCEPT